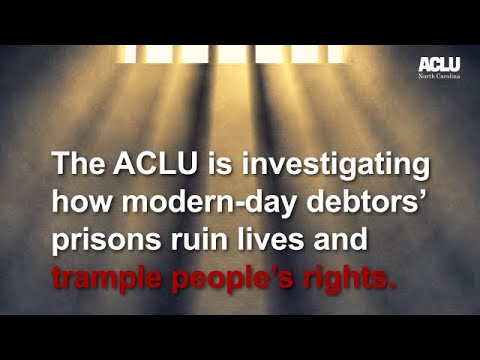 The ACLU of North Carolina is working to combat the criminalization of poverty by ending mandatory court fines and fees.

Thousands of people are in jail or trapped in a cycle of debt in North Carolina because they cannot afford to pay the series of court fines and feed that people are ordered to pay when they are convicted of any crime, even as minor as a speeding ticket. These costs start around $200 but can snowball to more than $10,000. You can be required to pay fees for court, jail, probation, electronic monitoring, drug testing—even community service.

If you can't afford the bill, the court slaps on another fine, increasing your debt. This cycle keeps people in jail, away from their family, jobs, and community. Coercive debt collection forces poor people to forgo the basic necessities of life in order to avoid arrest and jailing. It also wastes resources by jailing people who may never be able to pay their debts.

In this racially-skewed, two-tiered system of justice, the poor receive harsher, longer punishments for committing the same crimes as the rich, simply because they are poor.

The United States formally abolished the incarceration of people who failed to pay off debts nearly two centuries ago. But today in North Carolina, thousands of low-income people are in jail because of one reason: they cannot afford to pay a series of unfair and unconstitutional court fines and fees.

Have you been jailed because you owe the court money?