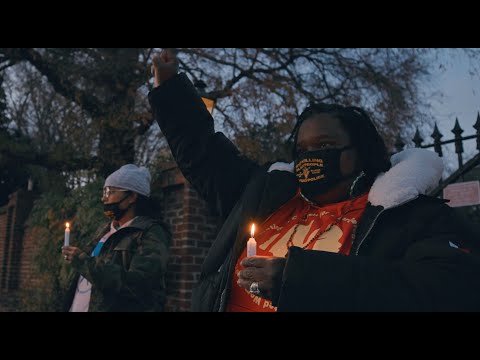 The mini-documentary Decarcerate NC Now: Let Our People Go follows activists participating in the Vigil for Freedom and Racial Justice, a 58-day demonstration outside of the Governor’s Mansion in Raleigh that concludes on January 1, 2021. Created by Wilmington, N.C.-based Working Narratives, the film shares powerful stories of currently or formerly incarcerated people who are calling on Governor Cooper to do more to end the disparate practice of incarcerating Black and Brown North Carolinians. The film premiered at noon on December 30, 2020, on YouTube (http://bit.ly/DecarcerateNowNCdocYT) and Facebook (http://bit.ly/DecarcerateNowNCdocFB).

“The film captured the optimism within the movement to free our people,” said Kristie Puckett-Williams, statewide manager for the ACLU of North Carolina’s Campaign for Smart Justice. “People will see in the film what organizers and advocates know from experience - that when you push a system or a system’s actors, you will get a result. While Governor Cooper has yet to make deep, lasting changes to the criminal legal system, there is hope in the recent pardons for five people, including Ronnie Long.”

The mini-documentary offers insight into the sheer magnitude of incarceration in the state by recognizing that each of the more than 30,000 people imprisoned has people who love them and want to see them free. Several scenes capture this sentiment as demonstrators take the vigil on the road by driving an RV around prison facilities and use a megaphone to let people inside know that they are fighting for their freedom. Andréa “Muffin” Hudson of the North Carolina Community Bail Fund of Durham makes the point clear in the film when stating, “We see you. We love you, and we will not forget our people who are incarcerated.”

For 58 days, demonstrators calling for clemency and decarceration reclaimed some of the space built by incarcerated people. Construction of the Executive Mansion took place from 1883 to 1891. Incarcerated people from a nearby prison built the mansion, and the prison also provided bricks and other materials. Names of imprisoned people who laid many of the bricks are visible on the sidewalk surrounding the mansion’s ground.

“This whole movement to decarcerate our state is about redemption,” said Puckett-Williams. “We’re seeking redemption for those who are victims of a racist legal system, redemption for the elected officials who helped create the system that denies freedom to more than 30,000 of our sisters and brothers, and redemption for the system itself, which should center equity and justice. The vigil may be coming to an end, but our fight for redemption will not end until our people are free.”

Partner organizations participating in the vigil and film include the ACLU of North Carolina, N.C. Community Bail Fund of Durham, The National Council for Incarcerated and Formerly Incarcerated Women and Girls, Emancipate NC, NC Prisoner Legal Services, the Center for Criminal Justice and Professional Responsibility at Duke Law, and NC Second Chance Alliance.

Decarcerate NC Now: Let Our People Go was filmed and produced by Working Narratives, directed by Sarah Sloan, edited by Robert Gourley, and Ismail Abdelkhalek is the film’s cinematographer.