Police Accountability on the Ballot in Raleigh

Starting September 18, Raleigh voters will head to the polls to vote for mayor and city council members. In this important election, justice is on the ballot. Our elected officials have the power to change the way our communities are policed, and their decisions can help stem racist police practices and end police violence.

Raleigh community members have spent years calling for more transparency, oversight, and accountability for our police department following a string of incidents of police misconduct, particularly against people of color.

Despite the pleas of community members, city officials have not taken significant steps to prevent such tragedies from happening again or to hold police officers accountable when they violate people’s rights.

This election will help shape the future of police accountability in Raleigh, and voters should know where the candidates stand. Along with our partners Raleigh P.A.C.T., Carolina Justice Policy Center, El Pueblo, and North Carolina Asian Americans Together, we are working to educate voters about the candidates’ positions on issues concerning police accountability, community safety, and justice.

We asked every candidate for mayor and city council the below questions to learn where they stand on these issues and to show them that these issues are important to Raleigh voters. Check out our candidate scorecard and read the full candidate responses at the bottom of this page.

Raleigh city officials should work to ensure that all communities are safe and that the Raleigh Police Department’s policies and practices promote justice, fairness, and respect. This election is your chance to be an informed voter: view our scorecard with candidates’ positions on police accountability.

Early voting in Wake County begins on September 18. Election Day is Tuesday, October 8. Check your voter registration, see a sample ballot, and get other voter information at ncvoter.org.

Read the full responses from each candidate below:

The ACLU is a nonpartisan organization that does not endorse or oppose any candidate for office. The ACLU’s goal is to promote voter education and voter participation. 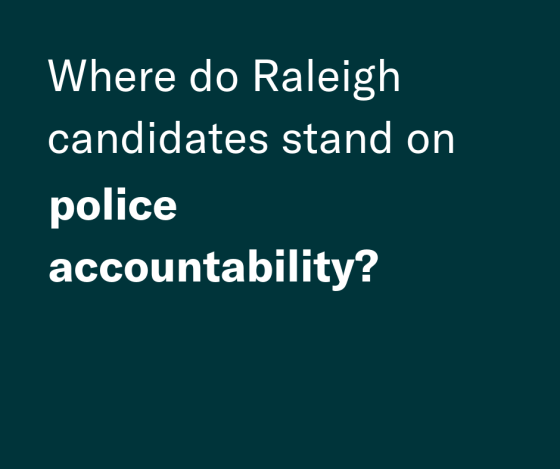